Tap to display the volume slider. Tap again to make it disappear.

Save the frame image in jpeg during posing.

Touching the playback position will seek to that position.

Changes the behavior at the end of playback.

Tap to enter marker mode and become a marker button.

You can scrub by swiping.。

You can switch between three display modes.

[A.] Sound pressure only

Can be changed to “Third Preset” button or “Play/Pause” button in settings.

“Third Preset” button by default.Playback at the third preset speed.

Can be changed to “standard speed” button or “play/pause” button in settings.

A different time can be set for the pause.

Long press to change the time.

Repeat operation can be performed by double-tapping and holding the second time.

The tap action defaults to switching screen display mode, but can be changed to play pause by changing the setting.

Switch between “Display mode switching” and “Play/Pause” by tapping the center of the screen.

Incidentally, when the tap is set to “play/pause,” “Display mode switching” is done by a long tap in the center of the screen.

All control buttons are responsive even when the controls are hidden.

Among them, side controls can be set to disabled when the control is hidden.

Video Viewer > Control view > Side Control＞”Enabled when the control is not displayed” switch.

The speed control buttons are evenly distributed by default, but their position can be moved by swiping the button down or to the left or right. 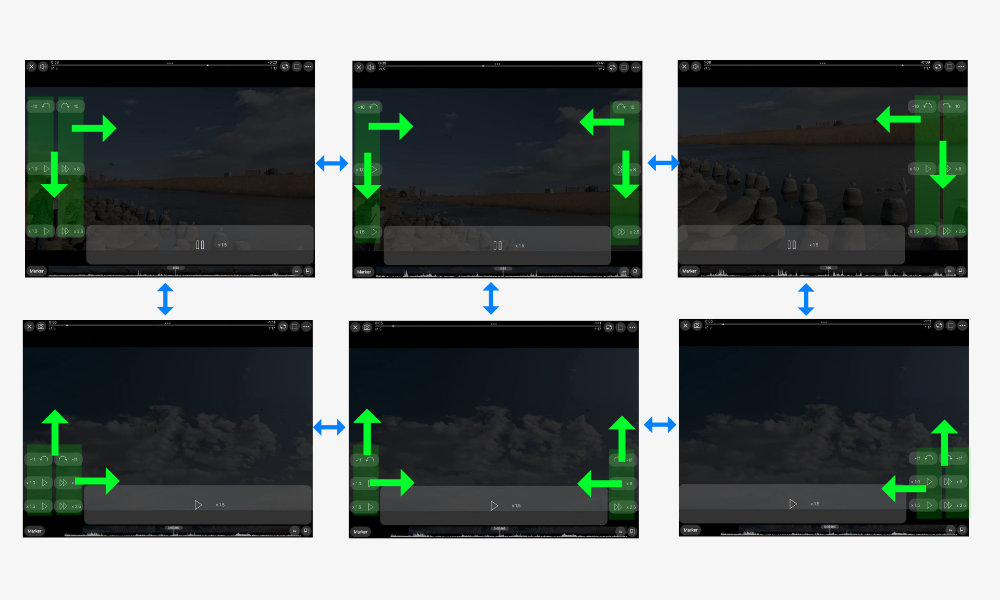 If you press and hold the center of the screen and shift it slightly, a thumbnail of that frame will appear and act as a drag-and-drop item in iOS. You can save the captured image to a specific location in the app or to another app.

ou can save to other apps on the iPhone since iOS 15. While dragging, you can exit the app with another finger, launch the Notes app, for example, and drop it.

Posted on Thursday May 26th, 2022
Tweet
This entry was posted in Viewer Operation, TouchTheVideo Plus. Bookmark the permalink.